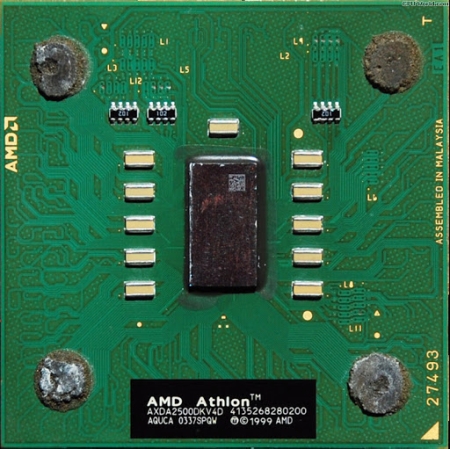 The AMD Athlon XP 2500+ was the fastest processor I had until I upgraded to my new AMD Athlon 64 4000+ which is furious. I had used this processor in my first built system for about six to eight months and during that time I never had any problems with it. I will try my best to get all of the most helpful information on this review, but since it is my second about processors I may still leave some information out (using the same layout).

The installation was easy even though it was my first time building my own system from scratch. I had read the instruction and other resources on how to safely install processors and I think that helped me a lot the first time. I purchased the Asus A7N8X motherboard to go with this processor since I only heard good things about Asus from one of my friends. The easy installation guide that is in the box comes in handy if you are doing this for the first time. The guide helps you get set up step-by-step on what to do to properly install your processor.

After installing the processor, you can either choose to install the stock (I did get the heat-sink even though it was unboxed) heat sink (which is perfectly good if you do not plan to overclock) or one of you favorites that will keep you processor cool and performing at its best. One tip I would like to give you if you are planning to install it yourself; use Arctic Silver thermal grease when installing the heat-sink. This will keep your processor performing at its best even if you overclock it.

Now when you boot-up for the first time with this processor, you would probably have to clear your CMOS to make sure you start out with a clean system, but that is not always the case. Just install your operating system of choice or if you already have an operating system installed, just boot up. One thing to keep in mind when booting for the first time is to keep an eye on the processor temperature (especially if you used a different heat-sink or overclocked).

When I think about it, I only seem to like one feature the most about this processor. I like the way this processor overclocks and if you have ever used an AMD Athlon XP 2500+ (desktop or mobile), you will know that this processor is an overclocker’s dream come true. I know that overclocking can damage your processor, but it was only about $170 and I was willing to risk it. I was able to safely increase the speed from 1.8 GHz to 2.22 GHz; that is an amazing 400 MHz increase in performance. This speed was equivalent to that of an AMD Athlon XP 3200+ (that is what my computer thought was installed).

I had used this processor for about six to eight months and it had not given me any problems. It did not overheat ever as I install my Thermaltake Silent Tower heat-sink to keep it cool since I overclocked. Getting this processor was like getting a Corvette after driving a Corolla for years. The speed is exhilarating, exciting, and sometimes overwhelming.

I performed some benchmarks with 3DMark 03 and 3DMark 05. I got a score of 6573 for 3DMark 03 and 1678 on 3DMark 05 (actual data). These benchmarks are accurate as of September 10th, 2005. My computer ran way faster than my old Pentium 133 MHz and provides me with a great deal of reliability. I was running Windows XP Pro SP2 and Fedora Linux on my computer and even with two operating system installations on one hard drive, this processor did not hesitate to perform at its best. Fedora Linux runs smoothly and without any problems.

I used to have an Intel Pentium based computer (my first computer) that my data bought back in 1998. It was fast (133 MHz); at that time it was a state of the art computer. In 2003, I finally got tired of that old guy and decided it was time for me to upgrade to a much faster computer, so I built my very first system (2.2 GHz); which also was fast in its time. The AMD Athlon XP 2500+ was one of the best overclockers out in the market; I think it still is one of the best. Even though I have upgraded from this processor, I only have good experiences to share.