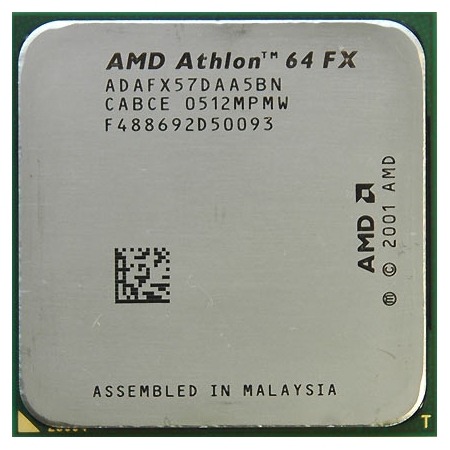 The fastest and most powerful processor I have used so far!

Only expect the best performance for this one baby…

Before Christmas, my boss (the owner of my company) asked me to build the fastest computer for his daughter.

He also said that money was no object and he wanted this as her Christmas present so I only had about a week to put it together. As usual, I went online to newegg.com and purchased the necessary hardware which included this AMD Athlon 64 FX-57 processor. Although, I had to go to CompUSA (my favorite offline computer store) to get the case and other big stuff. This processor cost me about $1020.00 (including shipping). I combined this processor with the Asus A8N-SLI Premium motherboard. I did not get the newest AMD Athlon FX-60 processor because it is fairly new therefore I cannot find any reviews on it yet.

As always the installation for this AMD Athlon 64 FX-57 processor was no problem; if you install as many processors as me you will be able to install these with your eyes closed (well sort of). On the other hand, these AMD processors are very simple to install anyways. All you have to do is follow the instructions in the quick install guide which will come in handy if you are doing this for the first time, even the second time, or if you just want to refresh your memory. If you follow the steps in the setup guide properly, you should not encounter any problems. This guide will also help you if you use the heat-sink and fan that came in the box, otherwise you will need to follow the instruction that came with the other heat-sink and fan.

I would not recommend overclocking your processor if you choose to use the stock heat-sink and fan (they may not be rated to work with higher temperatures). After all, this processor is one of the very fastest ones so you technically do not have to overclock it. I would highly recommend you use Arctic Silver thermal grease to install your heat-sink because it transfers heat more efficiently to keep your processor running cooler at all times. You can purchase these from your local computer store or online for about five to eleven bucks each.

Over time, your heat-sink will accumulate dust and dirt so the best thing for you to do to prevent it is to clean the inside of your computer every two to three months or so. This one time I did not clean mine for over six months and the processor started running hotter than usual, but after I cleaned the head-sink and the inside of my computer thoroughly, it was back to normal again. You can use the Falcon Dust-Off duster to blow all the dirt and dust off. It will cost you between four and nine dollars.

The first boot is always the trickiest one of all, so it is best to clear your CMOS/BIOS settings to factory defaults. This is to make sure you start with a clean new system; doing so will reduce the chances of crashes and conflicts once you start installing stuff. Also, some new systems will not work properly if you do not reset the settings. Although, you may not have to do this if you are just replacing or upgrading your processor.

Next, you will need to install your favorite operating system or if you already have an operating system installed, just boot up. One thing to keep in mind when booting up for the first few times is to keep a close eye on the processor and memory (RAM) temperatures; especially if you used a different heat-sink and also overclocked the processor. I also suggest that you make sure the memory sticks you used are compatible and can overclock without problems.

First and most important of all is that this processor is rated at 2.8 GHz and that was the main reason for this purchase as my boss wanted a very fast computer. I had told him about the FX-55 that was very close to this one and cheaper, but he chose to go with this FX-57 anyways. When you compare this processor to its competitor Intel, you may think that it is slower (because of the higher speed ratings), but when you use it, you will notice huge differences in overall performance and power (different manufacturers have different speed rating standards). I would always recommend AMD processors over any Intel just because they are easy to overclock, install, use, maintain, and plus they perform better.

Windows (or any other) operating system(s) will boot up way faster and your applications will startup much quicker than you are used to. So far I have not used a processor that is faster than this FX-57 because I have not had a customer who was willing to pay about $1400 just for the processor (the AMD Athlon 64 FX-60). Maybe I will be the first to install it on my own system before I install it on my client’s computers. If you cannot afford this Athlon 64 FX-57 or the FX-55, I would highly recommend the AMD Athlon 64 4000+ or AMD Athlon 64 X2 4400+ as an alternative (it also costs about half).

A lot of my clients ask me if the 64-bit processors actually are better than the older 32-bit ones, and I always assure them that it is the right way to go. Once they try it for their selves, they know right then that they will be ready for the future. If the client does not mind paying a bit more for the upgrade I would highly recommend the newer dual-core (X2), processors. I think the dual-core processors are more powerful and they will probably replace the FX series.

This processor uses the 939 pin design like most of AMD’s 64-bit processors. The 1024 KB L2 cache memory will run the 2000 MHz (1000 x 2) of FSB (Front Side Bus) without any problems. If you get a motherboard that will speed up your DDR memory, it will just add to the performance and power of your new or upgraded system. You will be able to run almost anything many times faster than you have ever experienced.

Let me tell you a little about processor temperatures. Heat-sinks, airflow, and voltage levels of the motherboard are some things that affect your processor temperature. In idle you can expect a 35 Degrees C temperature and when stressed it peaked at merely 56 Degrees C. With air-cooling I could pump it up to 3 GHz, but anything higher resulted in a somewhat unstable system. Basically I increased the core voltage to 1.45V, a multiplier of 15, and HTT set at 200. But I reduced it to the recommended 2.8 GHz because I did not want to reduce its life.

I always say that a review is not complete without the cons or not so hot part of the product. But I have not noticed any problems with this processor or any AMD processors I have ever used or installed on my client’s computers. One thing I can say for sure is that you can never go wrong with AMD. I updated all software, drivers, and games to make sure there were no problems. I do not like to take any chances with the systems I build because I do not want a return job. I would recommend that you check for driver and software at least once a month or as needed. I would also recommend updating your motherboards BIOS regularly to keep it performing at its best.

I had about a week to put this computer together and test it out and as of now, I did not find any problems or crashes of any kind. It does not overheat (my client did not want to overclock it just yet) ever. My boss said the computer is running very fast and has no problems with anything. I did perform some benchmarks with 3DMark 05 and 03. I got a score of 7125 with 3DMark 05 and 15134 with 3DMark 03 (actual data). These benchmarks are accurate as of December 17th, 2005. These benchmark scores do not mean a lot if you do not play games, but they are calculated with the CPU test scores at hand. The computer runs very fast with Windows XP Pro SP2 installed on it; it boots up in just about 10 seconds and becomes ready for use.

AMD provides a three-year limited hardware warranty that includes phone support. You can visit amd.com or dial (408) 749-3060 to get warranty support. You may be asked for the serial/model number and date of purchase for this unit, which can easily be found by the following instructions in the manual or ask one of the representatives on the phone.

After using this processor for a few days, I wish it was affordable so I could upgrade my own system. This is the best processor for your gaming rig, but not everyone can afford it yet. The AMD Athlon 64 FX-57 is a monster, it is impressive, and a top-notch high-end processor. For all the tweakers and overclockers out there, the multiplier is unlocked (woohoo). Play around with it and the FSB for some fun, but I would not recommend overclocking a thousand dollar processor.

If you want a very fast computer and do not care too much about the price, I would highly recommend the FX series processors. You will definitely be amazed by the speed and power of these processors. Best of all, your computer will startup faster, all applications will run quicker, and you will be able to multi-task seamlessly.