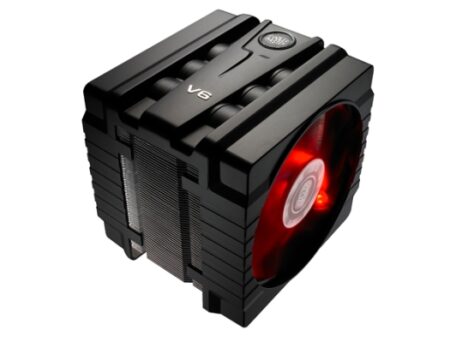 Keeps a wide variety of CPU's Cool and Stable!

In this Cooler Master V6 GT review, we will examine how the highly efficient CPU cooler operates in extreme temperature conditions when compared to the stock AMD AM2 heat sink provided with the AMD Phenom II x4 965 processor. The CPU cooler has a muscular engine look with thick copper heat pipes feeding into a rugged fan box with an attractive V6 logo resting on top.

When powered up the fan glows a deep red to give your computer an aggressive look inside your computer case. The design captured my attention but I wanted to find out how good this heat-sink really was with a few rounds of blistering temperature testing. How does a 3.6 GHz overclocked AMD Phenom II x4 965 perform with the Cooler Master V6 GT? How fast can you install the Cooler Master V6 GT cooler in an Asus M4A785-M Motherboard? What link does this CPU cooler have to video surveillance systems?

The brackets that come with the Cooler Master V6 Muscle Cooling system are low profile on the surface of the motherboard and readily accept the tall cooler that rises high above any capacitors or SMD’s that may interfere with installation. Most aftermarket CPU coolers cannot do this so keep this product in mind if you have a pesky motherboard that never seems to allow you to mount other products. Since this system can dissipate over 200 watts it is compatible with all the processors that Intel has to offer.

The Cooler Master V6 GT will support a broad range of processors and will fit many motherboards because it completely replaces the stock heat-sink mount. The Intel LGA 1366, LGA 1156, and LGA 775 processors are all supported. I did not show any pictures in this review, but I did mount this heat-sink rather quickly to a spare Socket 775 motherboard that I had laying around. The process took just 5 minutes so Intel loyalists can enjoy this product as well.

For AMD motherboard owners, this heat-sink system will basically fit any Socket 939 motherboard. In realistic terms, I mean the AM3, AM2+, and AM2 motherboards. The newer AM3+ motherboards should be compatible as well since they can accept older AM3 processors.

Ideally, you will want to install this heat-sink system at the same time you are installing a new motherboard and processor. Yet, if you are not then you will need to remove the motherboard from your computer system case first. A Phillips screwdriver and a paper towel to wipe off any excess heat-sink compound is the only thing you will need to finish this job.

Remove the stock AMD heat-sink from the Asus M4A785-M Motherboard and remove the four bolts on the black retention clip underneath. A black plastic tray and a flat piece of metal will fall from underneath the board.

Now select the AMD retention plate and the back plate from the box and use the four provided bolts to tighten them together.

Once the retention plates are installed, you will see the low profile of this system. In fact, aside from the bolts, it is lower than the stock AMD plastic plate.

Now locate the bracket with spring screws and place on the Cooler Master V6 GT heat-sink as shown. I feel this is the critical engineering component because it made of solid steel and will not bend when put under physical stress.

Once you begin to tighten the bracket, you should try to keep it level on both sides so that the AMD processor has a very flat surface to contact the heat sink with.

Here is another view of the clearance that this Cooler Master product has. The memory and other components are not close to the heat-sink at all. The six copper heat pipes allow this to happen because they transfer the heat to the fins above.

Using the provided hex key, you can tighten the contact of this heat-sink with the AMD processor at any time. I used it to fine-tune the mounting after installation.

Here are some comparison photos of the final installation of the heat-sink versus the stock AMD cooler. Notice the small size of the Cooler Master V6 processor plate. The smaller plate is the reason why the heat sink is so effective at rapidly transferring the heat away from your computer processor.

My experience installing this cooler was far different than the one I had with the Spire TherMax Eclipse II SP984B1-V2 on an AMD 1090 x6 processor. The retention clips bent when the bolts were tightened and I had trouble assembling the parts because the instruction manual was poorly written. As a result, I highly recommend the Cooler Master V6 GT just because it has dropped my AMD Phenom II x4 965 processor temperature and is so easy to install in a period of fewer than 30 minutes.

The Cooler Master V6 GT depends on airflow to be effective as a CPU cooler. The more airflow, the colder the processor can get. You do not have to get the room cold to chill your processor but if you do, the results are simply amazing. For this review, I placed an AMD 965 x4 processor out in the torture of my garage during winter. The stock cooler could not chill the processor even at 9.9 degrees Celsius but the Cooler Master V6 GT came alive to get rid of any spare heat this AMD quad-core had to offer.

The test system used for this testing was an AMD Phenom II x4 965 overclocked to 3.655 GHz on an Asus M4A785-M Motherboard running POV-Ray for Windows Beta which utilizes all four cores while creating stunning 3D images.

One thing that these test results did not show was how the massive 120MM fan would begin spinning faster as the heat increased in the computer I placed it in. The DynaLoop Bearing inside the fan seemed to help it roar to life pushing so much air that the exhaust fan on the back of the computer case was actually spinning faster. Part of the reason for the variance in the AMD Phenom II x4 965 temperature above 25 degrees Celsius was the fact that airflow in the system case had to be restricted to reach these levels.

You should note that the Cooler Master V6 GT only comes with one 120MM fan. A second fan box is included so you should really consider installing one if you are a serious overclocker wanting to run on air. While the AMD 1090 x6 processor can be overclocked reliably without a lot of cooling, the Intel Core i7 975 Extreme Edition 3.33 GHz 8M L3 Cache LGA1366 Desktop Processor is really going to need both fans just to keep it cooled to a decent temperature when trying to break the 4.0 GHz barrier that the AMD can easily reach.

I like the Cooler Master V6 GT. With this product, I have been able to move a powerful AMD computer outside to act as a control interface to my solar power system. I can connect to it with a Sonic Wall TZ200 and watch the status of my battery bank and inverters from anywhere in the world. Since I am now able to keep my computer system closer to my video surveillance equipment, I can transmit and record more video streams from outside without having to worry about overheating my AMD quad-core processor.

You can also use this Cooler Master product to overclock your AMD 965 to over 4.2 GHz with little increase in core temperature due to the highly efficient six heat pipes. The powerful cooling provided by this CPU cooler allows you to do a lot of things with your computer that was otherwise impossible.