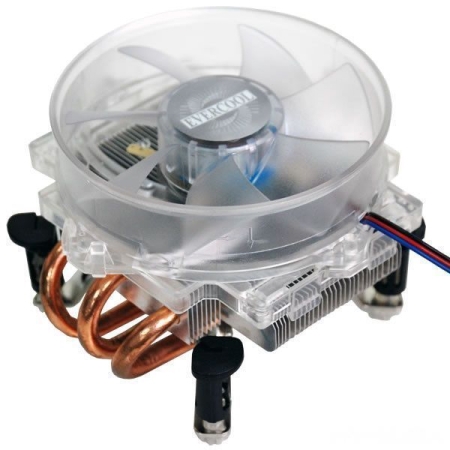 Seeking Alternatives to the Evercool HPH-9525EA

The Evercool HPH-9525EA is a heavy Aluminum heatsink infused with copper heat pipes, that is just a variation of 1980’s technology. Here are the results to prove it.

Water cooling is all the rage right now among the Intel overclocking community but the high price and failure risk of these systems keep some enthusiasts away. The alternative is to buy an air cooling system for your Asus Rampage Formula motherboard and protect your high dollar, gaming investment.

The Evercool HPH 9525EA CPU Cooler was the first of many heat-sinks I used to create a custom home server NAS for myself. I wanted to get a maximum overclock on my Socket 775 processor while at the same time achieving stability in Windows 7 Ultimate x64.

The Evercool HPH 9525EA CPU cooler uses heat-pipe technology and aluminum to transfer heat from your processor. The goal behind the design is to take advantage of the tendency for heat to rise. Using just three copper pipes, the heat is supposed to travel upwards into the aluminum resting just about an inch above the base. Other manufacturers and even Evercool, offer products that have heat pipes which carry heat over 6 inches above the processor itself.

The photo below shows how close the heat pipes really are in this product. Notice how they only extend a few inches above the surface.

The HPH-9525 Aluminum cooler was designed to operate with all Socket 775 or Socket T processors.

I must stress that this CPU cooler will not work with Socket 939, Socket 940, or Socket 1366 processors.

To get this CPU cooler installed, you will need a tube of Arctic Silver 5 thermal compound, a pair of long-nosed pliers, and a thin piece of plastic. The Evercool HPH 9525EA comes with a tube of the white thermal compound that represents very old technology for heat transfer. Please do not even place this white goop on your nice new Intel Q6600 processor!

Spread the Arctic Silver 5 across the surface of your CPU in about four smallish dabs. Use the thin piece of plastic to smear out the heat-sink compound into an even coating with no gaps across the entire processor die.

The bottom of most modern heat-sinks have a protective film attached to their mounting surface to keep it scratch-free. Remove the protective tape shown in the photo below so that you can apply the Arctic Silver 5 to its surface as well. You should use the same technique as done on the processor.

The most critical part of installing any CPU cooler that uses push pin locks is easy to access the motherboard tray. The Thermaltake Armor A90 black computer case will give you this ability through its innovative bottom access panel as seen in the product photo below. I was able to manipulate these tricky plastic components in a few minutes thanks to this time-saving feature. Using this wonderful tray, I was able to use my long pair of needle-nosed pliers to snap the four push pins in place all around the processor while pushing from beneath on the delicate motherboard. Since push pins require so much torque to apply, you must take your time to avoid damaging the capacitors that border the processor socket.

I test a wide variety of processors in my Asus P5QL-VM Socket 775 motherboard and to do this I need a heat-sink that is easy to remove without cutting my fingers in the process. The Evercool HPH-9525EA uses generic heat-sink fastener push pin locks to mount its four legs to the motherboard. The problem is that the pushpin locks that came with this Socket 775 CPU cooler are not strong enough to handle the mounting pressure exerted by the metal legs. As a result, the legs try to pull the push locks out before you can manage to secure them into position on your motherboard. I had a difficult time getting the HPH-9525EA on my Intel E1400 processor.

Four Blue LED Lights Will Enhance The Appearance Of Your Computer. The following images show how the fan on this heat-sink looks in low light conditions.

Anytime you want to do some Intel Extreme tuning, you need to consider the room temperature beforehand. To do this, I installed an LCD temperature probe to monitor the incoming air temperature. Next, I used CPUID Hardware Monitor to record the highest CPU core temperature. As a comparison, I also included the results from a Scythe SCMN-1100 MINE Rev.B 3 Heat Pipes CPU Cooler which rested in the same Thermaltake Armor A90 case at the same 2.4 GHz clock frequency to obtain a fair comparison.

The results of these extensive, multiple rounds of testing can be seen in the chart below. I was able to test a wide range of temperatures thanks to freezing weather outside my computer lab. Using a window and a simple fan, I could chill the room and Thermaltake Armor A90 computer case in a few hours while logging the results.

The only reason that I would ever want to install an aftermarket CPU cooler with heat-pipe technology is to overclock the processor. Whether you have an AMD 1090T or even an Intel Q9650, the goal is all the same; get rid of the heat efficiently. I was able to take an Intel E1400 Dual Core processor from 2.0 GHz to 2.4 GHz and keep it stable in Windows Vista Ultimate x64 edition on a SATA II hard drive.

Here is a SuperPi 1M comparison that shows the advantages of overclocking your processor:

My problem with this aluminum CPU cooler is that it could not keep my ASUS P5QL VM motherboard stable above 2.6 GHz on the E1400 CPU. To correct this issue, I ran a test on the Scythe heat-sink. Test Scythe revealed that I could take the Intel Celeron over 2600 MHz without any stability problems.

The one distinctive feature of the Evercool HPH 9525 Socket 775 CPU cooler for Intel processors has to be the four bright blue LED lights that will make your motherboard look fantastic in any computer case. The LED lights reflect in the spinning 95MM fan blades of the clear plastic fan. The effect looks even better while playing games like DC Universe Online at night. I would also suggest purchasing a set of Crucial Ballistix Tracer 2 GB DDR2 1066 memory sticks to increase the speed of your Gigabyte motherboard and create the dazzling light show seen in the photo below.

When searching high and low for a new Socket 775 CPU cooler, you want a product that works better than the stock Intel heat sink would. My testing clearly shows that this is not necessarily the case when compared to the Scythe SCMN-1100 MINE Rev.B 3 Heat Pipes CPU Cooler. The problem with the Evercool HPH 9525EA CPU cooler is that its aluminum heat-sink traps the thermal energy at its base. As a result, the radiating area is restricted to just within the location of the processor itself and hampers the ability of the massive fans in the Thermaltake Armor A90 case to pull the heat out.