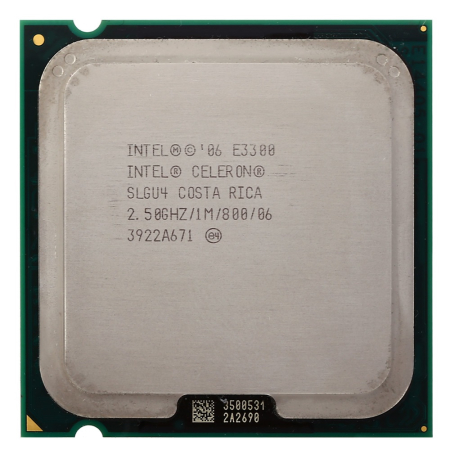 The Intel Celeron Dual Core E3300 2.5Ghz works well on the ASUS P5QL Socket 775 motherboard but can only reach 3.125Ghz on air cooling.

Almost by accident, I was recently shopping online and found the Intel E3300 45nm Dual-Core Celeron processor. Looking at the E3300 SLGU4 specifications, I noticed that it offers 1 Mb of Level 2 cache and an impressive 2.5 GHz clock speed. Since this Intel Socket, 775 CPU uses Core 2 Duo technology that means it can overclock and will outperform many other Celeron models on the market today.

You can actually cheat in your next custom computer system and use the Intel E3300 instead of an Intel i7. In fact, the latest popular PC game, Dragon Age 2 by Electronic Arts will work just fine with this processor. Instead, spend your money on a great graphics card to power through the 3D graphics in this Electronic Arts game. The EVGA GeForce GTX 580 1536 MB GDDR5 PCI-Express 2.0 Graphics Card should be purchased along with the Intel E3300 microprocessor. However, before you try it out, I highly recommend reading this review carefully to understand what you might be missing as far as speed. How far can you overclock the Intel E3300 SLGU4 processor? How can you pick the right parts for your new Intel Socket 775 CPU?

The Intel Socket 775 uses two distinct micro architecture families: Pentium and Core 2. Initially, the Pentium was the first introduced in the line with dual-core capability but it featured no hyper-threading. Intel soon realized that the Pentium architecture was not going to compete with advancements from AMD so they redesigned the core of their processors. The Conroe core was the first Intel Core 2 Duo branded processor ever offered to the desktop computer market. The Conroe is a replacement for the Pentium D and Pentium 4 branded CPU’s that were as much as 40% slower than their new counterparts. The first generation, the Conroe, was produced using a 65nm manufacturing process.

The Intel Celeron E3300 is from the Core 2 family, Wolfdale line. The die is 45nm with 1024 Kb of L2 Cache. The front side bus is clocked at 800 Mhz. Since the FSB of the Intel E3300 is just 800 Mhz, your computer will be bottle-necked with slow memory access speeds. As a saving grace to this architecture limitation, the Conroe core does offer 40% less power consumption when compared to the scorching disaster, the Intel Pentium D. The only way to make accommodations for the lack of front-side bus speed in the E3300 Dual-core is to overclock it directly at this point. As you see in the following section of this review, you can get some very promising results!

The Intel Celeron E3300 Socket 775 Processor will overclock quite well to 3.125 GHz with the help of the Arctic Silver heat sink compound applied to the die surface. For the testing portion of this review, I used an Asus P5QL-VM DO/CSM LGA775 motherboard, Crucial Ballistix Tracer 4 GB (1 GB x 4) DDR2 1066 all running under Windows 7 Ultimate 64bit edition. I was able to overclock the Celeron to 3.125 GHz using a Scythe SCMN-1100 MINE Rev.B 3 Heat Pipes CPU Cooler. The problem came with loading Windows 7 Ultimate 64bit. The computer would freeze after just a few minutes at 3.25 GHz. Even after bumping the vCore in the ASUS P5QL bios to +150, the processor still refused to boot into Windows 7.

Super Pi V1.1 is an application that extrapolates the specified digits of PI into a text file. Since the task is both processor and file system intensive it can give you an idea of how fast your CPU is. Processors with large on-die cache sizes and high bus speeds tend to do better in this benchmark. The problem is the calculation is single-threaded in this version so you only see the performance of one processor with this version of the benchmarking suite.

In this test, I analyzed the performance using the 1,000,000 digits of Pi calculation. I overclocked the Intel Core 2 Duo E3300 to different frequencies and ran the test 3 times and reported the shortest time returned in the list below. As a cross-reference, I also provided the benchmark results from other processors that I tested in the past few years in order of seconds that they took to complete.

Here is a chart of how the Intel E3300 Dual Core stacks up against the competition in Super Pi:

The Intel Q6600 Quad Core with its 2400 MHz clock speed was able to edge out the E3300 on the chart because of the 4 MB of dedicated cache allocated to each core. Conclusive proof that clock speed, even on the Core 2 chip, is not the only requirement for pure, number crunching, power.

A new version of the freeware 3D animation utility has been released that offers SSE2 enhanced processing extensions. POV-Ray stresses the floating-point unit and memory bandwidth of the processor to render stunning 2D images. The ray-tracing software package also makes use of all available logical CPU cores in your computer system to render images. For this reason, POV is my processor benchmarking package of choice!

For this test, I am using the benchmark.pov file with QuickRes.ini value of 512 x 384 NO AA since it is provided with all new installations of POV.

For a quick comparison, take at look at what these AMD processors can do with the same benchmark.

Looking at how these various other AMD and Intel processors performed in this benchmark gives us a clear picture of the effect that increased cache size can have with rendering times. The added 512 Kb of cache on the Intel E3300 cut 1 minute 51 seconds off the benchmark time when compared to its cousin the Intel E1400.

wPrime uses a recursive call of Newton’s method for estimating functions, with f(x)=x2-k, where k is the number we’re sorting, until Sgn(f(x)/f'(x)) does not equal that of the previous iteration, starting with an estimation of k/2. It then uses an iterative calling of the estimation method a set amount of times to increase the accuracy of the results. It then confirms that n(k)2=k to ensure the calculation was correct. It repeats this for all numbers from 1 to the requested maximum.

Each thread is designed to do 1/n of the work, where n is the number of threads. For example, if you’re calculating 16 roots on 4 CPUs, each CPU will calculate 4 roots. Some might argue that this style of threading is unrealistic in real-time performance, but in fact, is quite indicative of performance in several real-world tasks such as F@H which allows you to run several instances of the work at any one time.

The results of wPrime Benchmarking, through four rounds of overclocking the Intel E3300, are provided in the chart below. The chart shows that the Intel 3300 scales quite well when overclocked.

WHAT WORKS BEST WITH THIS E3300

The Intel E3300 SLGU4 Socket 775 processor is compatible with a wide range of motherboards due to its relatively low power draw and 800 Mhz front-side bus. Since many Dell and HP desktop computers still use slower processors, you can build your own computer and save a lot of money in the process.

The low front-side bus speed also has another benefit for the computer system builder, cheaper DDR2 memory. Kingston DDR2 memory comes in a Value Ram series which is very low cost compared to all other types on the market today. Kingston KVR400D2N3/1G 1 GB DDR2-400 PC2-3200 CL3 Memory can be bought in pairs and is easily found at many online retailers for less than $40 per stick.

Many ASUS motherboards now feature an integrated video card so you can pick one of these up and skip the purchase of a new ATI PCI-e video card until later. You can find an Intel motherboard that has onboard 3D video but they do not allow overclocking of Socket 775 processors so I recommend avoiding them.

The Intel Graphics Media Accelerator X4500HD comes with the following motherboards which should all make great choices for your next computer:

For a slightly higher initial cost, you can also want to consider these NVIDIA GeForce 9300 mGPU series of onboard video motherboards for equally increased 3D gaming power:

In conclusion, the Intel E3300 comes with a generous portion of 1024 Kb of L2 Cache, and the smaller 45nm die to increase your ability to overclock the processor while at the same time featuring dual cores to handle average gaming tasks. You can find the Intel E3300 on eBay for less than $50 right now but the auction prices are increasing as vendors sell out. I wanted the Intel E3400 but after two weeks of searching, had to give up finding one for a good price on eBay.