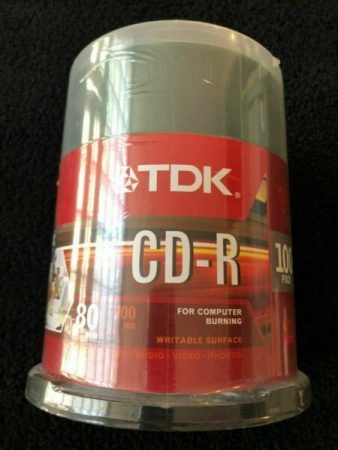 Burn anything on this media with ease…

I have been using TDK CD media for about two years now, and I have always had nothing but success with this brand of media. I went to Costco to look for some CD media that was reliable and would not cost too much. And even though the TDK brand was amongst the higher priced media, I still went ahead and purchased it because I knew that TDK would not let me down.

The particular 52x CD media I purchased was priced a bit higher than I was willing to pay but since it is TDK (I brand I have used for years), I just could not resist. I paid about $23.00 for a 100 pack spindle. My new Sony DVD-DL Burner can Burn CDs up to 48x, and since this media can burn up to 52x I did not have any problems. This was an amazing speed for me because my old Sony DVD-RW could only burn up to 32x and this new drive and media cut my burning time down to about three and a half minutes. It used to take me about five to six minutes to burn a full CD, but since I purchased my new drive and this media to go with it, I can burn a whole CD disc in about three minutes (most of the time). This TDK media was the first 52x media I have purchased and used so far, even though I have not burned at 52x yet.

All of the discs I have burned using my new drive have performed very well and without skips and stops. So far I have burned music and data on this media, and I have not noticed any lost data or low-quality music. I use this media at least three times a week without any disc being wasted. There are TDK logo and some other little text on the label side of the disc, but they are light enough so that it can be fully covered by your custom labels or writing easily. I would have preferred a blank label so that I would be able to customize it my way, but this is good enough for now. Usually, TDK CD media is a bit higher in price than other media with the same features, but since I wanted high quality and a good brand of media for my music and backup needs, I purchased this TDK brand.

I mostly use Nero Burning ROM to burn and copy my CD’s. This application allows me to choose the appropriate speed at which you want to burn the disc. I have had no problems burning these discs with Nero. Nero is so easy to use that my wife who is very new to the world of computers can burn CDs and sometimes DVDs without problems.

I have used the TDK brand CD media for about two years now and I have not experienced any problems while burning and after burning with them. I would recommend this particular brand of media because I can assure you that all content will be secure and safe on this media. Since the price is not as high as other name brand media (like Sony), it will not make a hole in your wallet to give this media a try; you can use this media for your daily burning needs. But if you still think it is a bit high priced then I would suggest other brands with similar features and speed.