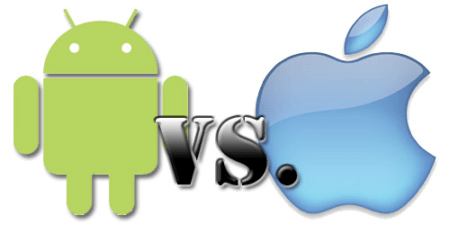 Okay, I just read this article on eWeek this morning about why iOS4 is better than Android 2.2 with a list of the top 10 reasons. Now, if you are an Android user, you would probably get upset and think the author is insipid. If you are an iOS user, then you would think every word of the article is accurate and believe it like these are words from Steve Jobs. In any case, to write an article about why one mobile operating system is better than another without having statistics or facts is pointless and plain stupid.

Read on to see what I mean…

Here are the 10 points from the article — let me know what you think :

1. Google isn’t so big on software

Google’s real plan with Android is to dominate the mobile advertising space. It fully realizes that the best way to achieve that goal is by doing whatever it can to capitalize on the desire for touch-screen smartphones with the help of Android. That’s precisely why Google offers its operating system for free. But despite this focus on mobile-advertising dominance, Google falls short compared with Apple on software design.

Response: Okay I somewhat agree with this point. I have used iPhones, iPods, and iPad’s and I can say that the UI is very polished and easy to use. This is one area Android has a lot of room to improve. But Android’s UI is customizable. If you don’t like, something — there is probably a way to change it. I don’t think you can say the same for iOS.

Apple understands what consumers want and how they will use a particular product. That comes through in all the products the company sells, including its iOS platform. Google, on the other hand, doesn’t seem to understand consumers as well as it could. It’s certainly doing a better job than most companies, but it still has a long way to go to match Apple. In fact, Google’s consumer understanding seems to be more Microsoft-like than Apple-like. And that could be a problem—especially for its operating system—down the line.

Response: Yes Apple understands that (loyal Apple) customers will believe anything God Steve will preach to them about any old product. A good example was pointed out by Scott Young at Android Life about the Mac Air’s three-year-old CPU.

Multitasking on iOS is a key reason why Apple has enjoyed such success in the mobile market. For years, consumers were hoping for true multitasking; for years, the company made no promises. But in iOS 4, multitasking is running on the iPhone. Because of that, Google has a long way to go to match anything Apple is currently offering.

Response: I don’t think the writer here knows that iOS did NOT have multitasking before iOS 4 whereas Android has had it from the time it was launched. It’s not Google that has a long way to go here! Apple is the one who is playing catch-up with iOS 4 to deliver features that other mobile operating systems like Android OS had long before.

4. Folders make it all OK

Apple’s iOS platform is better than Android 2.2 for several major reasons. But one of the minor things that consumers should think about is Apple’s operating system’s folder support. With little effort, consumers can quickly create folders, lump similar programs together, and more. It provides a rewarding experience. And it’s a concept that Google has to play catch-up with.

Response: The same thing applies here as well. Folders were introduced in iOS 4 only whereas Android and other OS’s have had them forever. Again, Apple is the one playing catch-up here.

5. Ease of use must come into play

In any evaluation between two operating systems, ease of use must play a role. After all, if a particular operating system is easier to use for the average consumer than is another, it should get the nod. In this case, iOS 4 easily gets the nod–Apple’s operating system is simply easier to use. What’s more, it doesn’t suffer from the strange quirks that arise on Android due to vendors trying to tailor the user experience to their own products.

Response: I sort of agree here too. iOS is easy to use but locked down to make it so easy to use. Android on the other hand, while not so easy is extremely customizable and open to do pretty much anything you want (if device manufacturers don’t mess it up by locking the device down).

One of the main issues with Android 2.2 is that the software doesn’t respond as effectively as it should when compared with iOS. Does that mean there is a responsiveness issue with Android 2.2? Absolutely not. In fact, compared with other operating systems, it holds up quite well. But Apple’s platform is different. It’s just that iOS simply provides more responsiveness when users interact with it. It could be extremely difficult for Google to match that any time soon.

Response: I somewhat agree with this one too. That does not mean that all iOS devices are extremely fast compared to Android devices. You also have to know that there are lots of very low-end devices with slower components running Android OS and that affects performance. High-end devices like the Droid series, Evo, or the Galaxy series devices, are the way to go with Android. Maybe the author should have actually tested some of these devices. I have used iPhone 3G and 3Gs before and after iOS 4 upgrades and believe me, not everything was fine and dandy. Performance did degrade because the hardware was not made for iOS 4.

Because Android is an open platform, vendors that get their hands on the operating system can change it however they see fit. That openness creates an environment across the Android ecosystem that loses uniformity and provides variations of the Android operating system on different phones. The result is sometimes spotty performance that must be taken into account when evaluating differences between iOS and Android.

Response: Yes because Android is free to anyone who wishes to use it and to do anything they want with it. iOS is only available to Apple and on iPhone’s, iPad’s, and iPod’s. I am sure if iOS was licensed out to manufacturers, they would have the same issues. But in any case, it is improving and the majority of the devices are running Android 2.1 or 2.2 these days.

Apple’s App Store is integral to the success of iOS 4. With hundreds of thousands of applications, Apple’s marketplace is the best place to find programs that appeal to both consumers and enterprise customers. Admittedly, Google’s Android Market has been growing at a rapid rate, but it has a long way to go to match Apple’s store.

Response: Okay I partially agree with this one. Although the Apple App Store has more apps than the Android Market, there are more free apps on the Android Market than the Apple App Store. I believe Android has quality more quality apps. More and more developers are developing for Android because they now see the revenue potential will only get better and better as more and more people adopt Android. With Android, you have a choice if you want to download/install apps from other sources.

Whenever users pick up an iOS-based device, they can access iTunes from the product. That’s extremely important. It provides them with an end-to-end entertainment experience that isn’t so readily available on Android. After all, iTunes is the world’s top music store. If only Apple’s products have direct access to it, few could make the case that Google’s offering can best Apple’s.

Response: First of all, when you buy an iOS device, you don’t have an option to NOT use iTunes. You are required to plug your device into your computer the very first time to even start using it. I agree that iTunes is very good at managing and syncing your content to your iOS device, but it shouldn’t be required. For Android devices, you have the choice of just dragging and dropping things you want on your phone or use applications like Amazon Mp3 to purchase your music and Double Twist to sync them to your device. You have a choice.

Google has said that Android 2.2 is not designed for tablets. Apple doesn’t have that issue with iOS 4. Currently, iOS 3 is running on the iPad. But this month, Apple plans to offer iOS 4 integration with its tablet. When that happens, the company will prove that its operating system is the best choice for just about anyone trying to go mobile. Then the onus will be on Google to respond.

I hardly read eWeek, but after this article, I think I will completely stop! What do you think? I think the rating and comments on the article at eWeek speak for themselves.

Can I advertise on BayReviews?

Yes, we have very competitive pricing plans and accept a variety of formats. Please contact us for more details.

Can I ask you to review a product I am interested in?

Yes, you can. Just use the contact us form to send us a message and we will consider reviewing the product. It does depend on a few factors such as product availability, funding, and time.

Please provide as much of the following information as possible:

Can I submit my own review?

Unfortunately, we do not accept user reviews at this time. But feel free to voice your opinion in the comments section of recent articles.

We do, however, have plans to implement this feature in the future.

Can I submit my products for review?

Please note that we test and review all products fairly and will not change our review and rating of products.

Do you sell any of the products I see on the site?

How do you acquire the products you review?

We buy products we review because we review what we own first.

We do, however, sometimes receive review samples but we still test and review everything fairly. When a review sample is provided by a partner, they cannot dictate how the review will turn out.

Our review and ratings are always based on our testing and experiences with the products.

Who writes these reviews?

All reviews on BayReviews are written by the editor-in-chief and our very knowledgeable staff writers and editors.