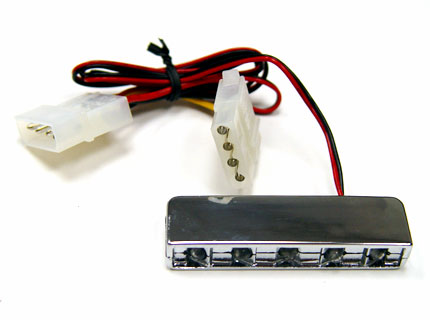 I was impressed with the lumen output of the Logisys Lazer MDLED5BL 5 LED computer case light and recommend it for any modder that wants to accent their motherboard or DDR3 memory sticks in the Thermaltake Armor A90.

The Thermaltake Armor A90 SECC ATX Mid tower computer case has a rather large window recessed into its stylish side panel that exposes the motherboard and memory inside to the prying eyes of your fellow DC Universe Online gamers.

To save face at the next tournament, I decided to install this Logisys Lazer MDLED5BL 5 LED blue light so that everyone could see the EVGA GeForce GTX 560 Titanium Video Card resting inside. Installing a LED-based, Lazer light to your desktop computer is a relatively simple task that can take less than 15 minutes with the proper accessories and tools. The only difficulty is choosing the right LED lighting product since they have varying degrees of light or lumen output. If you are interested in how well a 5 LED light will work then this is the review for you! Are 5 blue LED lights bright enough for a Thermaltake Armor A90 system case? How should you mount this 5 LED Blue Lazer light?

The packaging for this product is really easy to open. At the top is a single staple that holds the clamshell style plastic case together. Once, you remove the staple, it folds open to give you access to the LED light and Velcro mounting tape. The case plastic is clear and strong enough to survive almost any damage incurred while shipping so you can be secure in knowing that this 5 LED light will arrive in one piece.

Right away, you will see the 5 LED bulbs mounted within the chromed plastic housing of the Logisys MDLED5BL. The two outer blue Lazer LEDs are at a 45-degree angle while the two mid-set is at a 60 degree and the center led is at a 90-degree angle. A black and red wire pigtail extends from the base of this computer case lighting product which is terminated with a 4-pin power supply connector that allows you to supply 12VDC power to the three LED bulbs inside. The power cord is over 20” long so you will be able to mount this light in a wide variety of positions inside your system case.

INSTALLATION IN THE THERMALTAKE ARMOR A90

Before you physically place these blue LED lights inside your computer case, I suggest plugging the light into a spare 4-pin PSU connector to see how it will look. The blue lights will brighten about 1/2 a square foot of area if held about 12 inches away. The trick is to keep the LED lights from getting in the eyes of the person viewing your computer case. I suggest working with various mounting positions at the top and bottom of your computer case to get just the right effect.

The Logisys Lazer LED MDLED5BL comes with two short pieces of Velcro that you can use for mounting. I normally set my accessory lighting with the Velcro tabs for about two days and then use a small amount Gorilla Glue to permanently set the light in position. The Gorilla Glue will take about 24 hours to fully cure and bonds very well to metal or plastic surfaces.

Another favorite trick of mine is to create dancing light patterns inside a computer case. To get this effect, you first need to find a large, clear case fan, preferably a Thermaltake AF0026 120MM or larger. Next, place the Logisys Lazer LED about 6 inches away but pointed at an angle towards the case fan. When both the 120MM fan and Lazer LED come on, the blue light will be scattered by rapidly spinning, clear blades. To enhance the effect, you can add a second Logisys Lazer MDLED5BL 5 LED light pointed from another position as well.

I liked the brightness of the combined five blue LED lights in this Logisys light. The lights were able to paint the front of my Asus motherboard in the Thermaltake Armor A90 case. The small size of these LED lights and low heat output allowed me to place it in a confined space so that you cannot see it when viewed from the side.

Pictures really do tell the story with this Logisys product. I used this light to illuminate the Evercool HPH-9525EA Aluminum Base CPU Cooler that is resting on top of the Intel Celeron E1400 Socket 775 processor in these photos. The light is strong enough in a dark room to clearly make out the fan resting on top of the heat sink.

I was very impressed with the increased light output of this Logisys Lazer 5 Blue LED product. A similar 3 Blue LED light just did not work very well because it had trouble making the full viewable area visible in my computer case. The low power consumption and resulting low heat output of this Logisys product make it a natural choice for case modder’s seeking that extra bit of visibility in their gaming computer systems. There is still a better-LED product in the Logisys lighting arsenal so I will reserve my 5-star rating until another review. Due to the relatively low cost and extra-long power cord for this light, I give it 4 stars.