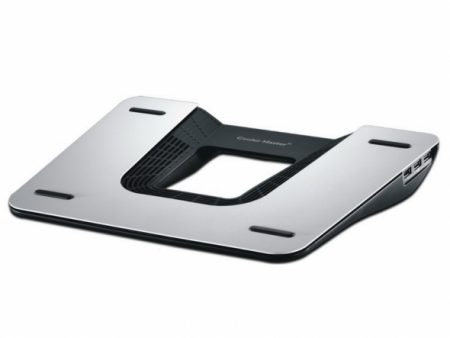 Cools well and quietly, stylish design and powered by USB 2.0.

A little large for storing in most laptop cases.

Have you noticed that the latest laptops which feature Intel i7 processors and NVIDIA graphics cards run very hot when placed on your lap or countertop? My Asus Eee PC 1201N Netbook has this same problem and it runs a so hot that it will crash while gaming.

Microsoft Windows 7 and the Atom 330 processor inside this netbook seem to generate a lot of heat which cripples the performance of this portable computer. After just 15 minutes of playing Plants vs. Zombies, the netbook will often crash or freeze up. So I decided to add a cooling pad to help it out.

After looking at several cooling devices on the market today, you will find that the build quality varies wildly and many require bulky external power plugs to operate. The Cooler Master Notepal Infinite EVO USB 2.0 will run off your own notebook’s USB power. Additionally, the Infinite EVO is solidly constructed with a full-frame design that is comfortable to use on the couch or while traveling.

Will the Cooler Master Notepal make my ASUS 1201N netbook stable in Windows 7 again? How strong is the airflow in the Infinite EVO Coolpad?

The information on the box describes it pretty well, “Dual Fan Aluminum Laptop Cooling Pad”. Let me be perfectly clear, the Cooler Master Infinite EVO doesn’t look like it was built out of spare parts from the garage. The overall case of this cooler is constructed of two thick pieces of plastic that come together to form a sturdy outer shell. The top of the netbook cooler features a brushed aluminum cover with integrated rubber pads on each corner that help keep your electronic device firmly in place while gaming or checking your email on the go. The cooling pad is much lighter than my netbook though so it is easy to move around while working in the office or relaxing by the poolside.

The cooling pad pulls the air from its back and blows it into the bottom of the computer from two sides. The rear of the Notepal Infinite EVO has two large ducts that draw the air into the two 80 MM blowers.

In this photo you can see where these air intake ducts are located.

It has an on/off switch and a clever slide knob adjustment for speed. There are three USB ports and even a DC power port for powering the pad. If high current loads are used for the USB ports, the 5 volt DC power supply can be plugged into the pad to keep your accessories powered up.

I decided to take the pad with me on a trip and discovered one of the problems. I bought an oversize case for my netbook, but even that wasn’t large enough to slip in the cooling pad. At 16″ X 12″ and 2 1/2″ high at the back, you will probably need a larger case or just carry it separately.

There are very few laptops that are too large for the pad, however. In this photo, you can see that the Infinite EVO can easily handle larger models.

In this photo, an ASUS 1005HAB netbook was placed on the cooler to give you a size reference.

Even with the dual 80 MM blower fans on there is almost no sound for all of the airflow that is coming out of both vents. I used the Kleenex test to show the airflow.

My ASUS 1201N netbook has been sitting on the shelf, relatively unused for over a year now due to its tendency to overheat in Windows 7. The problem seems to come from the excessive Intel Atom CPU temperatures caused by the restrictive airflow underneath the netbook’s case.

I used CPUID Hardware Monitor V1.17 32bit to measure the CPU and hardware temperature of the components inside the ASUS Eee PC 1201N netbook.

To gauge the air intake temperature of the Cooler Master Notepal Infinite Evo, a Fluke 16 Multimeter with a thermocouple was used. Primary standards were used to verify the Fluke’s accuracy, but there was no way to verify the CPU’s results. I used a small room and the room’s cooling/heating unit to vary the temperatures during the course of each 12-hour test run.

The Notepal Infinite EVO worked quite well, cooling the CPU down 7 to 14 °F below the temperature of the PC without the cooling pad. I was surprised to see the dip of the CPU temperature at about 86°F without the pad. I put this down to the computer throttling the fan to maintain even temperature control.

Our favorite feature was the ability to keep this Cooler Master notebook cooler running of the laptop’s USB port while on the go. Being able to keep Windows 7 stable while playing video games on the NVIDIA ION chipset, was, of course, the greatest help of all. We will continue to use this product and I hope you consider it if you have a netbook or laptop that could use a little assistance in staying cool.