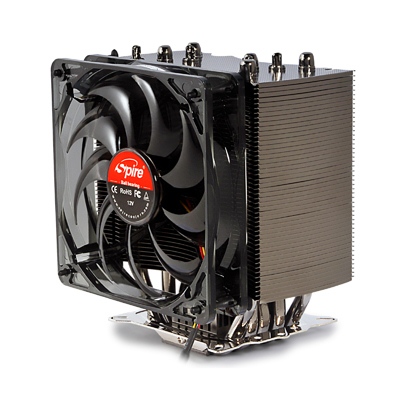 A Bit Bulky but Great Performance!

May not fit all cases.

A good way to ensure that you get maximum life from your desktop is to do your part in making sure your system stays cool. A good CPU cooler is an excellent way to prolong the life of your desktop. Allowing you to work proficiently, and reduce the number of errors that are linked to overheating. The Spire TherMax Eclipse CPU cooler has it’s heat pipes strategically placed to ensure quick heat displacement. The TherMax Eclipse also has two fans that can be placed onto the heat-sink for maximum cooling.

The Eclipse can be used on either an Intel or AMD motherboard. The Cooler comes with hardware that will allow you to place the cooler on either type. My first try around I tried to install in a mini-tower desktop but that didn’t work out too well, so I installed it in a mid-tower that I had and it fit snuggly. I didn’t have any other coolers to compare the TherMax to, so I compared how it fared to the heat sink and fan that came with the desktop.

The Spire TherMax Eclipse comes in a nicely packaged box with a clear front that will enable you to see the contents inside. Inside the box, you will find the cooler, two fans, screws/rubber fitting to attach the cooler to the motherboard, and the instructions on how to configure it. When first looking at all of the pieces it was a bit confusing and I was thinking that it was going to be a hard task than I originally thought. After reading the instructions (which are easy to follow) I had confidence that the Eclipse would be simple to install.

The cooler has five copper U shaped heat pipes that are surrounded by thick fins, which are made of nickel. It is fairly light at 822g (it looks heavier than it really is). The Eclipse is fairly bulky so you will need some space inside your tower. The fans are two 120 x 120 x 25mm fans that run at 2,200 RPM so that you get maximum circulation. Fans also run at 29dBA, so they are fairly quiet. It comes with all the plates and screws to attach the cooler to the motherboard and rubber hinges to attach the fans to the cooler.

The Spire TherMax Eclipse also comes with its own Thermal compound but I decided to use the Coolink Chillaramic thermal compound to test. The Coolink Chillaramic is actually very easy to clean off and simple to apply. You don’t have to use much of it to get the job done and there is enough for 30 applications so it should last a while. The fans both have three pin connectors in order for you to power the fans from the motherboard. One fan also has a four-pin peripheral connector in order to connect the fan directly to the system power supply. When I actually try to connect the fan directly to the power supply my desktop would power on for about 10 seconds and then power off. I have a feeling that my system power supply was not powerful enough to power the fan. Once I connected directly to the motherboard the problem ceased.

After reading the installation instructions the installation of the Spire TherMax Eclipse was straight forward. I had to take the existing cooler, fan, and brackets off but after that, it was a quick process. I have an ASUS A8M2N-LA motherboard with an AMD Athlon 64 2.4 GHz processor.

After removing the old cooler and fan, I attached the back-plate and the mounting screws to the back of the motherboard. I applied a small amount of Coolink Chillaramic thermal compound and lined the brackets at the bottom on the cooler with the screws from the back coming from the motherboard, and secured the connection with the spring-loaded screws. After the cooler was secured I attached both additional fans. I secured my motherboard back into the tower reconnect all of my devices to the motherboard and started the computer. At first, the computer would only power on for about ten seconds or so before it would shut down, so I disconnected the cooling fan that was connected using the four-pin peripheral connector and only used the fan that was powered from the motherboard and it worked perfectly. I recommend that you make all of your motherboard connections before you put the fan in place so that you have more room. After that, the system powered up and was ready to test.

When first opening the packaging of the Spire TherMax Eclipse II was a bit confused about how all of the parts fit together, but after reading the installation instruction it made the process a bit easier. The Eclipse is a bit bulky so make sure you have plenty of room inside of your case (horizontally and vertically). Make sure you are comfortable with taking your motherboard out of your system because to properly mount the Eclipse you are going to have to take out the motherboard. If you want to use both fans, make sure your power supply can handle the extra peripheral. As far as cooling my system, I am satisfied and would recommend the Spire TherMax Eclipse cooler. I got significant cooling results and lower fan speeds which will prolong the life of my PC. The fan was not aloud as the default fan and with lower RPM’s didn’t have to work as hard which saves power. If you have plenty of room in your tower case and need the extra cooling power I would consider the Spire TherMax Eclipse.

Can I advertise on BayReviews?

Yes, we have very competitive pricing plans and accept a variety of formats. Please contact us for more details.

Can I ask you to review a product I am interested in?

Yes, you can. Just use the contact us form to send us a message and we will consider reviewing the product. It does depend on a few factors such as product availability, funding, and time.

Please provide as much of the following information as possible:

Can I submit my own review?

Unfortunately, we do not accept user reviews at this time. But feel free to voice your opinion in the comments section of recent articles.

We do, however, have plans to implement this feature in the future.

Can I submit my products for review?

Please note that we test and review all products fairly and will not change our review and rating of products.

Do you sell any of the products I see on the site?

How do you acquire the products you review?

We buy products we review because we review what we own first.

We do, however, sometimes receive review samples but we still test and review everything fairly. When a review sample is provided by a partner, they cannot dictate how the review will turn out.

Our review and ratings are always based on our testing and experiences with the products.

Who writes these reviews?

All reviews on BayReviews are written by the editor-in-chief and our very knowledgeable staff writers and editors.