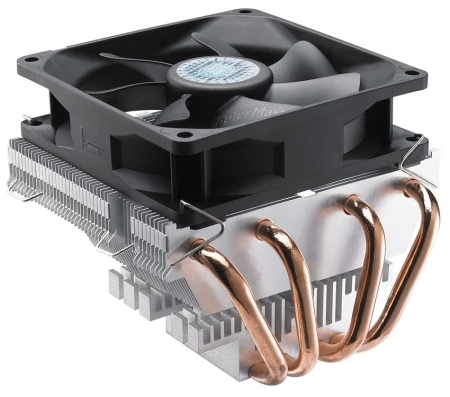 Overall this is a good CPU cooler with good results and also does not cost too much.

Fits great but performance can be better.

A little loud and the installations instructions may not be clear enough.

Keeping your system cool is an important aspect of getting the maximum life out of your PC, therefore, a CPU cooler plays major part in your overall cooling solution. Last time we tested the Spire TherMax Eclipse cooler and got some good results. Today we will be testing the Cooler Master Vortex Plus CPU cooler. The Vortex Plus can be used with the following CPU Sockets Intel Socket LGA 1366/1156/755, or AMD Socket AM3/AM2/940 /939/754. Its height of 3.3 inches allows it to fit in my case without taking up much room, but I found the installation manual a bit confusing and it took some time to figure out how to properly install the cooler.

Being that the Heat sink and the fan are fairly small the Cooler Master Vortex Plus comes in a fairly small package. The Cooler dimensions are 116 x 100 x 84mm and the fan dimensions are 92 x 92 x 25mm and fit quite nicely into the box. The packaging is informative. It has pictures of the cooler and the fan connected together and each separately. On the packaging, it also lists the features, specifications of the Vortex Plus, and also lists a website to visit if you want more information on the product. Inside the box contains the cooler, fan, mounting assembly, and a small syringe of thermal compound (Enough for about five applications). The cooler weight is about 445g and is made of aluminum. The four pipes (06mm in diameter) that connect to the CPU are also made of aluminum. The cooler is small and sleek looking and does not take up a bunch of room inside of the case. The fan is also small in size and fits directly on top of the cooler. The fan noise output is approximately 17-35dBA.

The instruction on how to mount the cooler was rather confusing to me. It was not clear to me whether or not to use the plastic CPU mount that came with the Asus A8M2N-LA system board or to use the mount kit that came with the Cooler Master Vortex Plus cooler. With a bit of research and help from a fellow IT technician, I was able to figure out how to properly install the cooler. Once I understood how to connect the cooler, it was easy but trying to understand the instructions that came with the cooler was a bit frustrating. Once I got the Cooler installed, it was time to reconnect all the connections and test the product. When I initially turned on the PC I got a CPU fan error and the PC would turn off after 5-10 seconds. I had to go into the system BIOS and enable the system fan. Once the BIOS settings were changed the PC fired up without any issues. The Fan clamped on the cooler without any issues also.

I have used this Compaq Presario SN2030 to test the Spire TherMax Eclipse cooler, which is a much larger cooler and fan unit. I want to compare the results with that of the Cooler Master Vortex Plus to see how the Vortex stands up to the larger TherMax cooler. I tested the temperature for one hour on idle and on load for each cooling system. I used SpeedFan v4.40 to measure the CPU temperatures and I used CPU Burn-in v1.01 to load the CPU. First I tested the CPU temperature on idle (1 hour) and on load (1 hour) using the Spire TherMax Eclipse and then using the Cooler Master Vortex Plus.