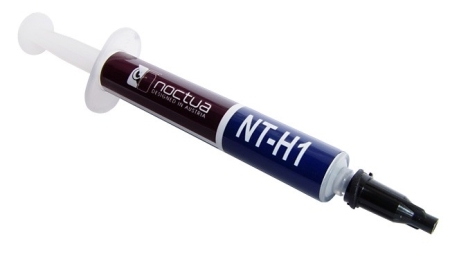 One of the better CPU cooling choices!

The overall performance makes this thermal compound worth every penny you spend.

Easy to apply/clean, not expensive and long lasting.

Performance could be a little better.

As always, thermal grease plays a very important role in keeping your CPU cool as the heat-sink and fan do. Thermal grease/compounds allow you to run your CPU a few degrees cooler. Choosing the right compound is the key to getting the best results because all compounds perform differently.

A good choice of thermal grease will not only allow your system to run cooler but should also be easy to apply and take off at the same time. So we test the Noctua NT-H1 thermal compound to see if it the best or not.

Surprisingly, the TX-3 performed better than the Arctic Silver and the NT-H1. I had thought that the NT-H1 would have performed about the same or better than the TX-3 but it did, however, beat the Arctic Silver (which was expected). On the other hand, while the NT-H1 didn’t beat the TX-3, it did come pretty close to it and the difference was on average only 1 to 2oC. So, I wouldn’t take it out of the picture either. It is a great value for the price you pay for it. Now I would love to test the new Arctic Silver 5, which I hear is supposed to be really good. I would think that it would either come close to or beat the TX-3. So I will surely have to give it a try and see for my self.

I didn’t have any issues applying the NT-H1 compound on my CPU, unlike the issue I had with the TX-3 (it is tough to spread as it is very thick). You don’t have to use a strong piece of cardboard to spread it on the CPU. Just squeeze some on the CPU and either use a little piece of cardboard or your fingers to spread a thin layer evenly on the CPU.  Then, install the heat-sink on it and you are good to go. It is also very easy to clean off, unlike the Arctic Silver grease that I used before. Arctic Silver grease is very hard to wipe off and it gets all over your hands and sometimes on the processor itself (the pins of the processor). I got very good results even with the stock fan and heat-sink with the AMD Athlon 64 FX-60 processor. The NT-H1 costs about $6.99 online. I don’t really have any other complaints about this thermal grease besides the performance.

Although the Tuniq TX-3 beat the Noctua NT-H1 thermal grease by 1 or 2 degrees, I would still highly recommend it. It basically boils down to ease of application and performance. The NT-H1 and TX-3 both provide really good performance despite the temperature difference. Personally I would use either NT-H1 or the TX-3 depending on which is readily available at the time. I really have no preference at this point.