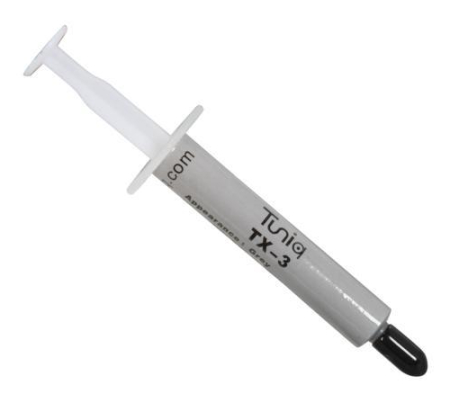 Keep you CPU cool at all times!

It does keep your processor cooler without spreading and it is consistent.

Nice consistency, keeps the processor cool and worth every penny.

May take a bit of work to spread and apply sometimes.

When trying to reduce the operating temperature of your computer system, thermal grease plays an important part in that of the cooling fan and heat-sink. You will be able to run your CPU a few degrees cooler if you choose the right thermal grease to work with your setup.

A good choice of thermal grease will not only allow your system to run cooler but will also be easy to apply and take off without making a huge dent in your wallet. So we look at the Tuniq TX-3 which is the predecessor of the TX-2.  Let’s check out what the TX-3 can do for us.

Just for comparison reasons, we will also test the Arctic Silver thermal grease the same way. I have used Arctic Silver for a few years so would like to see the difference too.

So it is quite obvious that the TX-3 performs better than the Arctic Silver. It performed better both at idle and on load. As I said, I used Arctic Silver for a few years and thought it was amazing. But after using the TX-3, I was just amazed at the difference in temperatures. There is a newer version of Arctic Silver called Arctic Silver 5 but I don’t know how much better that would perform against the TX-3. I guess I will just have to try it out to find out (more on that later).

I had some trouble applying this TX-3 thermal grease on my CPU at first but I got the hang of it when doing it the second time. It is also very easy to clean off, unlike the Arctic Silver grease that I used before. Arctic Silver grease is very hard to wipe off and it gets all over your hands and sometimes on the processor itself (the pins of the processor). I got great results with even the stock fan and heat-sink for the AMD Athlon 64 FX-60 processor. The TX-3 costs about $5.99 after a mail-in rebate at newegg.com.

I had always used Arctic Silver on all my computer builds up until now. I had always thought that Arctic Silver could not be beaten, but I was wrong. The Tuniq TX-3 blows it far out of the water than one can imagine. I would highly recommend the TX-3 to all who need to upgrade their CPU or build a new computer system. Everyone with even a little bit of computer hardware knowledge knows how important it is to keep the operating temperature as low as possible of any computer system, so get the TX-3 and stop worrying.