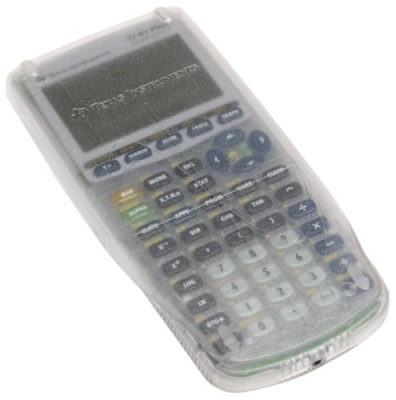 It is faster and has more storage space.

Resolution could have been better.

When I started my classes at San Francisco State University almost a year and a half ago, I had to take lots of math classes as my major was Computer Science. I wanted to get a calculator that would make calculations in my Calculus classes a bit easier. I got a lot of recommendations for the TI-89 but I already had the regular TI-83 and I liked the way it worked. So I went to Target and bought this TI-83 Plus Silver Edition calculator for about $130 minus a 10 percent employee discount (yes, I used to work there).

HOW USEFUL IS IT?

I was first introduced to Texas Instruments calculators when I started high school back in 1995. I used to have those little Casio’s in middle school. Since I already had the regular TI-83 I know this baby like I know the back of my hand. I picked up basic programming in high school algebra classes from fellow classmates. I used to program how to solve problems with set formulas in just seconds. I even tried making basic games (tic-tac-toe, racing, shooting, etc) with this calculator.

I like the key layout of this TI-83 Plus SE over any other model because I am so used to it that it just seems natural. And like me, everyone in my class thinks that the TI-83 is the easiest calculator to use, but it does not have some of the useful functions as the TI-89 and the better TI-92. Even though I would love to own the TI-89, I am totally satisfied with this unit as it performs as I want it to and if it does not have a function built-in… I just program it myself.

You would probably want to know if this calculator can do differentiation, integration, or other calculus problems… right? Well, unfortunately, unlike the TI-89 and TI-92 this calculator cannot do differentiation and integration, but I made a program that can calculate the results of definite integrals quickly. Your professor may have a program or two like that. I would suggest learning to do the functions yourself before you program it in.

One of the new things available in the Plus editions is the application features; this unit came with about 16 or 17 applications that help you with math problems, or just change some calculator settings. These applications run fast (like assembly apps) and add a lot more flexibility to the already huge list of functions built-in.

Besides math applications, you can download and transfer games to this calculator and pass time quickly without getting bored. The extra memory gives it more speed and storage space.

The screen is pretty big (about 2.5 inches diagonally) with a resolution of 96 x 64. You can easily adjust the contrast by pressing the 2nd key and the up or down key to adjust. This feature is available in almost all Texas Instruments calculators. As the battery dies out the contrast will get dimmer and dimmer, but you can always turn it up again.

The clear plastic skin (with glittery effect) is nice and the faceplate fits tightly to prevent damages. It has fallen (you know those smooth school desks) many times and still works like a charm. Unlike iPod’s this calculator will not get scratched that easily. In fact, I do not have any scratches on in so far. When TI made this calculator I think they kept high school and new college students in mind. Overall the calculator looks cool because of the sparkling translucent design.

I have been using this calculator for almost two years now and it still performs at its best. I use it in my calculus class to graph and calculate, but I also use it to program and play games. Once I even made a program that allowed two of these calculators to connect to each other and do instant messaging (you need a linking cable); I was in high school then and had lots of time to kill.

For me, this calculator was a major upgrade from the regular TI-83 because it was slow and could not hold many programs or games. Since I was writing basic (programming language) programs, I needed more memory and speed. The basic programs ran slower than assembly programs because they were not compiled instead they were interpreted. But this new model provided me with more speed and memory. Although, now I think this calculator is slow… that’s just me though.

If you are not going to play games or use the applications, I would suggest getting a lesser-priced model of this calculator. Because you have to really use all the extra features to get your money’s worth. The applications and expanded memory are nice additions because I was really in a need for more speed.