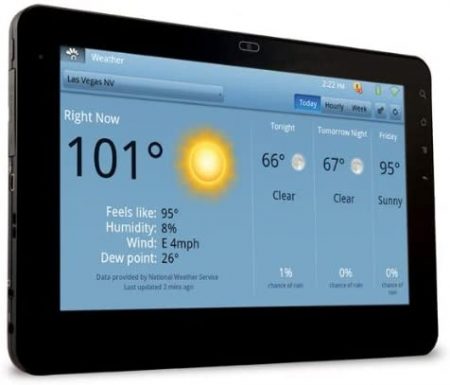 I had been search for a good Tablet for a while now, but have been waiting for the right features and the right price for me. So last week, I found the ViewSonic gTablet going for $299.99 on Amazon and I jumped right on it.

I had read the user reviews and expert reviews on the gTab and was under the impression that the Tegra II processor inside was going to blow everything else out of the water. User reviews had also pointed out that the 10.1 inch screen had a lot of glare which I chose to ignore because ViewSonic makes really good monitors after all and they wouldn’t sell me a product with a crappy screen right? Well, I wrong!

So, just yesterday I received the gTab and as soon as I took it out of the packaging, I immediately noticed that it was pretty heavy. While it was still powered off, the screen looked great. Now for the fun part, turning it on and playing with it. So, I power it on and right away notice that the glare from the lights above (at work) was more than I would have liked. I also noticed that the viewing angle on it wasn’t all that great either. If you don’t look at it in the correct angle, you will not see anything on the screen at all. So I used my handy, Cooler Master Notepal Notebook stand in a way so I was able to see the screen clearly, but it still had all the glare. So there are two major issues with the display, the viewing angle and the glare. In my opinion, these are a big deal and the reason I am return the gTab today.

Now let me tell you about the software. The gTab comes preinstalled with Android 2.2 with a highly customized ViewSonic skin called Tap N’ Tap (TNT). TNT looks nice and the idea is good, but the implementation is just worthless. Luckily, you now have the option to use the classic (standard Android 2.2) style home screen. The main issue with TNT is the fact that it is really laggy and slow. But once you get out of TNT, you will start to see the gTab shine or glare. The overall experience is really good even though it is not vanilla Android still, you still get the similar experience. The settings and other interfaces are designed for the gTab so you get quick access to commonly used features like WiFi settings, Storage info and more.

So when I got home from work in the evening, I thought the glare would go away because we don’t have as many lights at home as we do at work. But it was still there. I still somehow managed to root the gTab and install the latest ROM’s from Cyanogen Mods (CM 7.0.3) to see what it was like. Although, the ROM was way faster, the screen glare still bothered me a lot. It bothered me so much that my eyes started to hurt. That’s when I made the decision that I need to send the gTab back and look for something else.

So now what? Well, now I am back to square one, which is looking for and researching about other Tablets. Why not get the iPad 2 you may ask? Well, I am not a iPhone or iPad kind of guy. While I do own two iPod’s (classics), I would never go with any device with iOS on it. iOS just doesn’t sit well with me.  Why? It is too limiting, I like to tinker with things as you may have guessed.

This is how my first Tablet purchase not experience went. While I found out a lot of things about the device and the form factor — something you cannot get from testing a display unit at a store, I now know I need to carefully evaluate everything about the Tablet before making the purchase. So what do you need to look for when purchasing a Tablet? See below.

Things you need to look or consider when purchasing a Tablet are but not limited to the following (this are things I will look for). First and foremost, you need to decide what size fits your needs best — 6″, 7″ or 10″! Because with size comes weight which is the second thing you need to consider. Because unlike a smartphone which is small and light, you will want to get the largest screen on the smallest possible form factor that is the lightest. Holding a Tablet is not the same as holding a smartphone. Go to store and play with different Tablets — hold them in all ways possible or in usual ways you will be holding them (don’t of it as a phone). Check the display from different angles and take pictures from the Table to see how clear or crisp they are and how they look on the display. Then you need to see how much memory (as in storage) the Tablet has and if it can be expanded with memory cards. You also need to test the user interface (OS) to see how fast it performs. So the fasted processor the better and the more RAM the better performance you will have overall. Another important factor to look for is the battery life — see what type and size of battery does the Tablet have. Look for wording such as 3650mAh — mAh means milliampere-hour. The high this number the longer the battery will last on a full charge. It is not unusual to see this number in the range of 6000 to 7000 mAh for Tablets. Then you probably want to see what kind of speakers and cameras the Tablet has if that is important to you. Then you have to decide if you want 3G/4G or WiFi or both on the Tablet. 3G/4G Tablets will usually cost more and will also usually have a monthly charge for the 3G/4G service associated with it. WiFi only Tablets usually cost a little less, but you can only free public or your own personal WiFi to access the Internet. But the choice and decision is yours to make there. You may also want to consider cases or covers for the Tablet because unlike phones, they won’t fit in your pockets and backpacks may not be the safest place on their own to store your three, four, five hundred dollar investments.

I hope this help you make better Tablet purchasing decisions. Share your experiences, thoughts, suggestions, etc in the comments if you like.