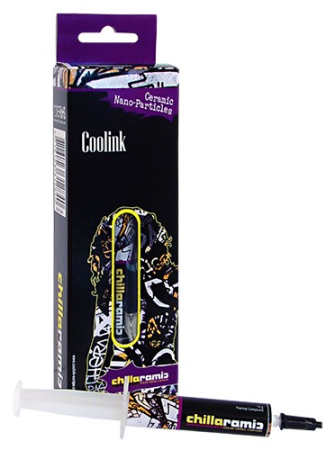 A very good performer that’s easy to apply regardless of the grainy texture.

The Chillaramic thermal compound comes in a nicely designed cardboard box that is easy to access, unlike those tightly sealed plastic enclosures that you need a sharp object to open. On the back of the package, it describes some of the product highlights, and inside nothing more than the syringe. I guess Coolink thought that applying the compound was fairly self-explanatory and did include instructions inside of the packaging.

The Coolink Chillaramic Thermal compound is a bit on the grainy side, but easy to apply. You don’t need to apply much to the bottom of the heat-sink (About the size of a Dime) for it to work. You can apply a bit more if you feel the need to add a thicker coat. I would recommend having a damp cloth handy just to clean the tip of the syringe (It can get a little messy trying to put the cap back on to the syringe. Soap and water will get the compound off of your hands with no problems.

When conducting the test I didn’t expect to see a huge difference in cooling performance by using a different compound if any at all. The Chillaramic was impressive cooling my CPU another degree or two compared to the thermal compound that came with the Spire TherMax. It just goes to show that using a good thermal compound can give you added performance, which compliments using a good cooler and fan. I give the Coolink Chillaramic thermal compound 4 out of 5. I didn’t really care for the texture of the compound that was a bit grainy but it did make a difference when cooling my CPU and in the end that is all that counts.